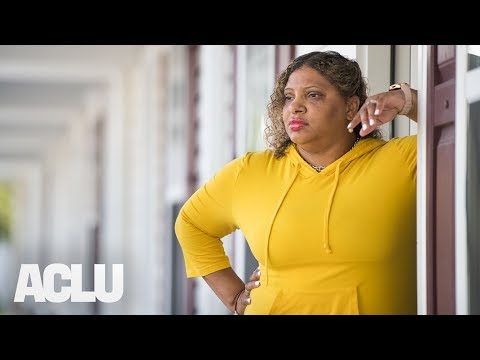 In the latest front in the nationwide fight against the criminalization of poverty, on October 31, 2019, the American Civil Liberties Union, ACLU of South Carolina, Terrell Marshall Law Group PLLC, Southern Poverty Law Center, and South Carolina Appleseed Legal Justice Center filed a federal lawsuit challenging South Carolina’s policy of automatically suspending the driver’s licenses of people with unpaid traffic tickets. The South Carolina Department of Motor Vehicles does not ensure that people who cannot pay will not lose their licenses in violation of the Fourteenth Amendment’s promise of due process and equal protection under the law. South Carolina’s wealth-based license suspensions impact more than 190,000 people, funneling those who are unable to pay, particularly poor people of color, deep into cycles of poverty, job loss, traffic violations, and entanglement with the legal system.

South Carolina has one of the highest poverty rates in the nation, with more than 790,000 people—one out six residents—living in poverty.  Driving is crucial to life in the state.  Nine out of ten people rely on a driver’s license to get to work, and existing public transportation does not meet the state’s needs.  Yet, the South Carolina Department of Motor Vehicles (DMV) punishes impoverished people statewide with the loss of their driver’s licenses when they cannot pay traffic tickets.

When the South Carolina DMV receives a report that a state resident or driver’s license holder has not paid a traffic ticket, it automatically suspends the person’s driver’s license without providing proper notice or a hearing to ensure that people who cannot pay will not lose their licenses.  A suspension ends only when a person pays in full all traffic fines and additional DMV fees charged for reinstating a suspended license.   Neither the DMV nor the South Carolina Office of Motor Vehicle Hearings (OMVH)—the state agency with the power to review suspensions—provides any hearing at which a person can explain their inability to pay.  In fact, the OMVH refuses to provide a hearing to people seeking to challenge the suspension of a driver’s license for failure to pay a traffic ticket unless they pay a $200 filing fee for each suspension being contested.

In South Carolina’s system, people who cannot pay lose their ability to drive—which they need to find and keep their jobs—unless they divert money from rent, utilities, health care, and other needs to pay for their driver’s licenses.  These wealth-based driver’s license suspensions prevent people from earning money, taking their children to and from school, accessing health care, purchasing groceries and other necessities, and traveling to places of worship.  Due to longstanding racial disparities in poverty and wealth, Black South Carolinians are disproportionately harmed.  Black people make up 48% of those with driver’s license suspensions for failure to pay traffic tickets, even though Black people make up only 27% of South Carolina’s population.

Plaintiff Emily Bellamy, a Black woman, is struggling to support her four young children by working in a daycare facility.  Her driver’s license was suspended for failure to pay traffic tickets received in 2018.  Bellamy could earn additional money by working as a home health aide and by cleaning vacation condominiums.  But she cannot get these jobs without a valid driver’s license since the positions require driving between work sites.  Because she cannot drive, Bellamy is also unable to care for her ill mother and must pay for car rides to get her daughter to and from school and herself to and from work.

Plaintiff Janice Carter, a Black woman and Air Force veteran, faces financial hardship and works part-time for an organization that helps people involved in the criminal legal system.  Carter did not know her driver’s license was suspended for an unpaid traffic ticket until a 2018 traffic stop.  Carter cannot accept a better paying job as a caseworker that would enable her to pay her traffic fines and fees and DMV fees because the position requires a driver’s license.

Plaintiff Linquista White, a Black woman and single mother, lives in fear that her driver’s license will again be suspended for failure to pay traffic tickets despite her inability to pay, as it was earlier this year.  While her license was suspended, White faced the impossible choice of driving to get to work and take her daughter to school, or not driving and losing her job and failing to care for her family.  Desperate to get her driver’s license back, White diverted money needed to replace damaged belongings to pay to reinstate her driver’s license.  Because she still has three pending traffic tickets related to her financial hardship, White is at risk of imminent wealth-based driver’s license suspension.

U.S. Supreme Court precedent makes clear that the Fourteenth Amendment rights to due process and equal protection of the law require consideration of a person’s inability to pay before they are punished for nonpayment of a court fine.

Plaintiffs seek a declaration that the DMV’s indefinite suspension of driver’s licenses for nonpayment of traffic fines and fees without proper notice, a hearing, and a determination of willful failure to pay violates the Fourteenth Amendment.  They also seek an injunction to prevent the DMV from suspending driver’s licenses for nonpayment without first providing hearings on ability to pay and sufficient notice of options other than payment in full to prevent license suspension for those who cannot afford to pay.  The lawsuit further seeks an injunction that would require the DMV to lift any suspensions previously imposed for failure to pay traffic tickets, to strike any reinstatement fees related to those suspensions, and to reinstate any drivers licenses that have no other basis for suspension.

The complaint, White v. Shwedo, was filed in the U.S. District Court for the District of South Carolina.