The Atlantic
One monday morning last fall, at Spring Valley High School in Columbia, South Carolina, a 16-year-old girl refused to hand over her cellphone to her algebra teacher. After multiple requests, the teacher called an administrator, who eventually summoned a sheriff’s deputy who was stationed at the school. The deputy walked over to the girl’s desk. “Are you going to come with me,” he said, “or am I going to make you?”
Niya Kenny, a student sitting nearby, did not know the name of the girl who was in trouble. That girl was new to class and rarely spoke. But Kenny had heard stories about the deputy, Ben Fields, who also coached football at the school, and she had a feeling he might do something extreme. “Take out your phones,” she whispered to the boys sitting next to her, and she did the same. The girl still hadn’t moved. While Kenny watched, recording with her iPhone, Fields wrenched the girl’s right arm behind her and grabbed her left leg. The girl flailed a fist in his direction. As he tried to wrestle her out of her chair, the desk it was attached to flipped over, slamming the girl backwards. Then he reached for her again, extracting her this time, and hurled her across the classroom floor.
The other kids sat unmoving, hunched over their desks. The teacher and the administrator stood in silence. As Fields crouched over the girl to handcuff her, Kenny tried to hold her phone steady. Her legs were shaking and her heart was hammering in her chest. If this was really happening, she thought, someone needed to know about it—someone, apparently, outside that room. “Put your hands behind your back,” Fields ordered the girl, sounding excited, out of breath. “Gimme your hands! Gimme your hands!”
Finally, in an unnaturally high voice, Kenny blurted: “Ain’t nobody gonna put this shit on Snapchat?” The administrator tried to quiet her down, saying her name over and over, but she would not be silenced. “What the fuck?” she said, her voice rising further. “What the fuck?” Then she hit the Post button on her phone’s Snapchat app.
Videos taken by Kenny and other students ended up online, and the story went viral that night. The girl who was thrown was black, like Kenny, and the footage of her being flung across the classroom by a white police officer inflamed debates about race and law enforcement. Hillary Clinton tweeted that there was “no excuse” for such violence, while the singer Ted Nugent praised Fields for teaching a lesson to “a spoiled, undisciplined brat.”
After Fields handcuffed the girl, another deputy arrived to escort her out of the classroom. She would be released to her guardian later that day. Then, according to Kenny, Fields turned to her. “You got so much to say?,” Fields asked. “Come on.”
Kenny did not speak. She got up and put her hands behind her back.
The next day, the principal called the incident “horrific,” and the school-board chair said it represented an “outrageous exception to the culture, conduct, and standards in which we so strongly believe.” Richland County Sheriff Leon Lott, who oversees the officers at Spring Valley, said he was sickened by the videos and was investigating his deputy’s actions. He added in passing that Niya Kenny had been arrested for “contributing to the chaos.” None of the other officials mentioned her name.

Her arrest was based on a law against “disturbing school,” a mysterious offense that is routinely levied against South Carolina students. 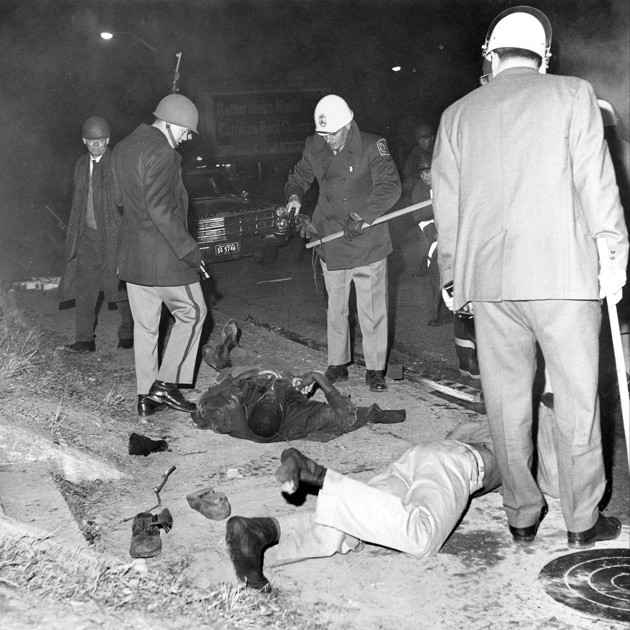 A student-led civil-rights protest in Orangeburg, SC, in 1968 during which police killed three black teenagers.  An expanded disturbing-school bill was signed into law soon after (Associated Press)